Some people constantly live the outdoor lifestyle in NZ, while others of us only half fit bods don’t really consider it too much unless pushed by our friends.

I knew my pack was too heavy and I also knew that I am not the fittest person in hiking boots. But an overnight stay in a hut in the bush was just too tempting for me.

The drive out to Whangarei Heads took an hour and a half and we managed to find the farm driveway where we risked leaving our cars for the night. We loaded our packs on and I secretly hoped I had the right stuff to drag myself up the small mountain I was faced with. The grassy track took us straight up and into the bush where we continued to climb.

Now I have always been a straggler, It does not matter how much prep I do or exercise. Just don’t have the physical make up. I use the excuse often these days that I need to stop and take photos. Which I do  But when your head is a whirl and your body an ache bravely You just push on.While the rest of the group waits on. Up the top. Resting.

Hey, I’m in the bush that I love and doing the outdoor thing. There are not many places I would rather be.

Having great friends who offer to take some weight from your pack helps and gives you a new lease on life and you shoot ahead and stop to wait for them to catch up. That is just what happened. Perhaps the large beef curry that I had made and the rather full bottle of after dinner refreshment was too much to expect to carry.

Once upon the ridge, the going is flat and easy, enjoyable with views far out to sea. This was not a summers day but an Autumn cloudy day with a storm feel lingering overhead. Summer would probably be too hot for hiking in any case.

At last a sign, a real sign that said Peach Cove and showed us the way. Not long after that, there was another sign, yes a real sign and this one said 818 steps. As we paired down over the side of the cliff. Oh goody. It’s a bit like some sort of hiking triathlon. But the hut is at the bottom I was told. We just need to conquer the stairs. Funny. Stairs tackled one by one being careful not to overbalance and go over the side. The hillside was won. Legs like jelly and ready for a relax we sighted the hut.

Check some photos out

What a magic spot. surrounded by the kiwi bush. Bunks a long drop, roof and a deck what else could you ask for.

After a rest and light refreshment, we walked the little track down to Peach Cove. Fishing and exploring the little beach was bliss. A snapper to go with the beef curry that I carted was a perfect end to the day as we sat on the little deck and listening to the birds still chirping into the evening.

We Bought our House with the help of Kiwisaver 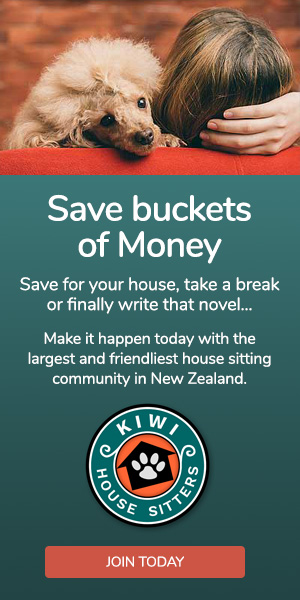